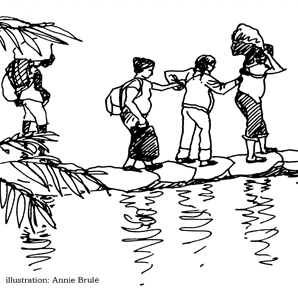 notes from Cúcuta at the Venezuelan border with Colombia

It’s the things we don’t see, the things I don’t see that worry me the most – the things that are out of sight and out of mind while we are preoccupied with the other.  Decisions followed by edicts and orders and mandates, as we see with the government response to the Corona virus outbreak can be life saving.  Such moves can have unintended consequences.   It’s important we have enough distance and calm and perspective to see the whole.

A week ago there were 6 safe houses (albergues and refugios) for Venezuelan refugees along the road from Cucuta to Bucaramanga, with and average of  30 to 120 Venezuelans staying in each.    These were filled with young and old men, women, and children  — many in groups, and many together as families.  They all had one thing in common, a day to day existence and a life without reserves to pay even for the bus ticket  up and over the mountain pass to Bucaramanga (35,000 Colombian Pesos, the equivalent of  $12 USD).   I don’t like the expression, ‘a hand to mouth existence,’ but it does says it clearly, they we a day or at most two from hunger and no options.

On Tuesday March 17th, four days ago, the Colombian government officially closed their international border, this included the 2,200 km border with Venezuela.  On Wednesday, three days ago, a message appeared on the website of the mayor of Pamplona…..

Earlier that morning, the albergues and refugios in Pamplona had opened as they did each day —  at 6 AM with Venezuelans leaving to try to walk and hitch rides to Bucaramanga.  Mid-morning police began to gather up Venezuelans  still in the albergues and found on the streets of Pamplona without identification/registration to be in country.    They were taken to Pamplona’s Coliseo (Coliseum) in police cars  — women, children, men, and the elderly.  There had been no arrangements made for water or food.  Those that managed the albergues brought what provisions they could.  At 4 that afternoon they were loaded onto buses and carried to Cucuta.  The plan had been to pass them to the immigration authorities.   As the buses headed toward the border it became apparent that the immigration authorities were not prepared to receive them and approximately 87 were left at a refugio just outside of Cucuta, at the edge of a town called Don Juana, this run by Sammaritan’s Purse.  Their ultimate destination uncertain.  It was noted in communications between GIFMM (the coordinating body of UN and NGOs caring for Venezuelan refugees) and Samaritan’s purse that the refugees had all chosen to participate by their own will.  It was also apparent that the arrangement to utilize the refugio was a last minute initiative that took place as refugees were on buses and headed toward Cucuta.  Individual testimonies were collected from these persons, they described their treatment from authorities as ………..